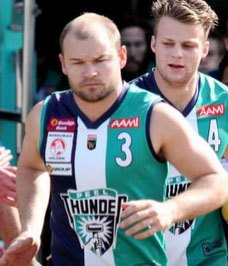 If you put you money on Subi going through the season unbeaten you’ve learned a lesson – don’t bet on footy.
It didn’t take long for East Perth to take control of the Leederville Oval derby on Good Friday and the grand final rematch was like a Collingwood premiership – a cakewalk.
Brant Colledge probably played the game of his career for the second week in a row and capped things off with three goals. The ruck battle was interesting with Paul Johnson missing for the Royals but Fraser McInness proved an able replacement with an unlikely ruck partner in Jarrad Oakley-Nicholls who played the most unusual game of his career. Steven Payne and Craig Wulff were again good for East Perth, Murray Newman kicked four goals and 2012 Bomber Brendan Lee returned to footy in great shape.
Scott Worthington battled hard in defence for the Lions and Shane Yarran kicked three goals.
There was an interesting happening about 11 minutes into the second quarter when, perhaps for the first time in WAFL history, Sudanese players had consecutive kicks in a game. East Perth’s Agid Gardoud, who made a promising debut before hurting a shoulder, kicked a nice goal and then David Madut, who battled strongly in the ruck for Subiaco kicked the ball out of the centre clearance.

South Fremantle remain unbeaten after an all-the-way Good Friday win over Claremont under lights at Fremantle Oval. Ryan Cook, Marlon Pickett and Ashton Hams kept the ball moving for the Bulldogs and ruckman Brock Higgins had another good game.
Shaun McAdam kicked three goals for the Tigers, John Williams was in good form and Sam Petrevski made an interesting debut.