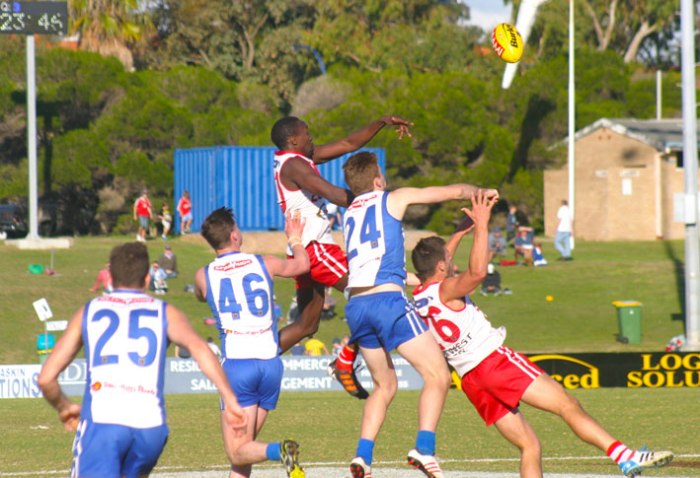 Paul Mugumbwa gets up high to spoil during the derby. Photo by Les Everett

NOT much has gone right for South Fremantle in 2014 but on Saturday at East Fremantle Oval  they put in a stellar performance that will give prospective coaches a feeling they’ll have something to work with from 2015.
The Bulldogs jumped the Sharks and by three quarter time had set up a 48-point lead – no guarantee of victory given recent history. A mature last quarter, highlighted by an inspirational goal from James Sellar took South to a 43-point win.
Tim Kelly has had a good season and on Saturday he was at his best, continually weaving his way through congestion to drive his team forward. Youngster Anthony Collica was very impressive and finished with three goals. Ben Saunders kicked four goals, Ashton Hams used the ball expertly from defence and Brock Higgins put in another hard working display in the ruck. Draft prospect Jarrod Pickett kicked two goal on debut.

Jarrod Pickett was impressive on debut for the Bulldogs. Photo by Les Everett.

Jack Perham marks for the Sharks. Photo by Les Everett.

Brock O’Brien showed great dash from defence for East Fremantle, Jack Perham always looked a threat as a key forward and kicked three goals and Andrew Stephen was again solid in the back line.

At Joondalup West Perth and Swan Districts put in the kind of the performances the experts predicted from them for the season. By half time Swans had scored one point and the game was all over. Unfortunately for the Falcons, despite the win, they’re sitting 20 premiership points below Swans on the ladder.
Rohan Kerr was a star for West Perth, Kris Shannon kicked three goals and midfielders Aaron Black and Shane Nelson again had stand-out games.
Matthew Rogers and Tony Notte worked hard for Swans.

At Leederville Oval Subiaco led all day in the clash of the co-tenants and top two. It ended a 10-game winning run for East Perth and breathed a bit of life into the competition.
Kyal Horsley was in brilliant form for the Lions and must be entering Sandover Medal calculations, Andrew McDougall continued his good form and Matthew Boland kicked three goals.
Steven Payne and Brendan Lee were excellent for the Royals along with big man Callum Sinclair who came to WA courtesy of the Lions.

At Lathlain Park in the battle for the unwanted wooden spoon Peel put in their best performance of the year. It was tight early but the Thunder kicked six goals in the third and fourth quarters to give Perth the slip. Michael Woods kicked five goals for Peel, Brendan Jones and Anthony Morabito dominated the midfield, Max Duffy kicked three goals, Colin Sylvia and Hayden Crozier were very effective and Matt Taberner worked hard as a key forward.
Gerard Ugle was a constructive player for the Demons and Mark Deaves kicked four goals.

There’s now some interest in the ladder. The Royals are on top by 0.1% and East Fremantle’s grip on fourth spot is not completely secure – they need to win one of their last three or hope West Perth loses one. Claremont is in the same position as West Perth but have a very low percentage.