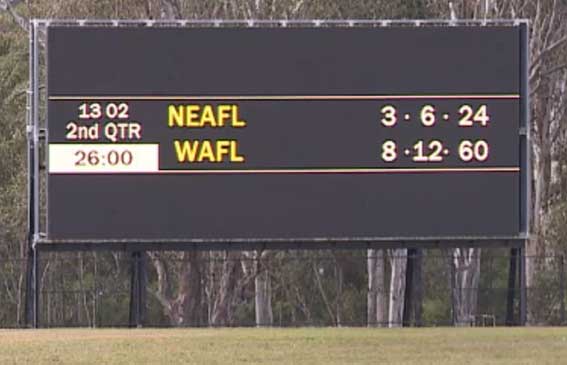 The half time scoreboard at Blacktown Oval. Taken from the NEAFL website live stream.

The NEAFL kicked the first two goals but from then on the WAFL controlled the play with the NEAFL winning their share of the ball but giving it away a bit too easily.
Blaine Boekhorst put in an exciting performance for the WAFL along with fellow defenders Tallan Ames and Ashton Hams. Haiden Schloithe, Luke Blackwell, Brendan Lee and Ryan Cook were good in the midfield and Ben Saunders (five goals) and Tony Notte marked well in attack,
Chris Dunne was the NEAFL’s best player and Matt O’Dwyer ran well from defence.
Meanwhile the weather back in Perth was horrible so maybe it was a good thing that the highest level of footy on display in WA over the weekend was the A-grade amateurs.