with the recent release of the war on drugs third album lost in the dream it gave the rat a chance to reminisce  about one of the gigs of the year so far at southbound in january. 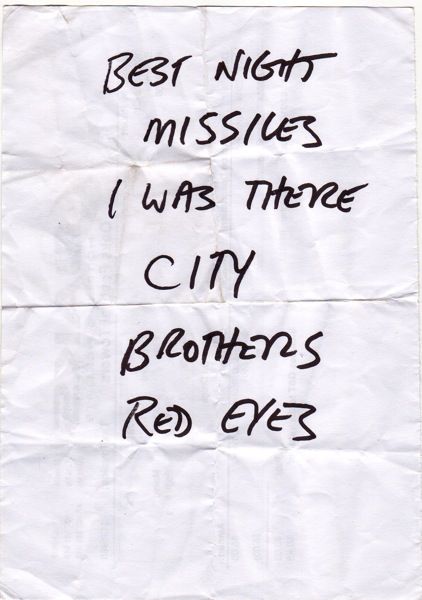 the war on drugs released slave ambient in 2011 to much critical acclaim. that album  was certainly one of the highlights of that year show casing adam granuciel as one of the most obsessional musicians around. while adam is a self-confessed bob dylan tragic it is not so much his dylanesque vocals that made slave ambient so good but rather his endless layering of guitar loop over guitar loop and organ. 2013 was spent writing the new album with no touring at all. so southbound got one of the first DRUGS gigs for over a year but would they be rusty, would they play only material from slave ambient or would they play some new material? within minutes of the previous band violent soho finishing their performance adam is out on stage tuning guitars and checking all the electronic loops and connections. despite his casual dress wraparound shades and dishevelled long hair there is a real obsessive in there. no introduction as he is straight into BEST NIGHT and then BABY MISSILES from slave ambient. then it’s a “hello southbound how are you” before he is off again into I WAS THERE and COME TO THE CITY. while the three previous songs were great CITY is a real barnstormer of a song. a total blitzkrieg. it is dylan’s highway 61 revisited meets kraftwork’s autobahn. they nailed that one and you can see adam relax and enjoy the moment. “are you having a good time? what have you all been doing today?” “swimming with the jellyfish” comes the reply. “man those box jellyfish are real dangerous” continues adam with concern in his voice. “we are real men here” is the retort. this is too much for adam and with rueful smile he adds “you wish” they then storm on into BROTHERS before adam introduces the new song RED EYES. “this will be number one on the triple j 100” he laughs. it is a mighty song. its full of driving guitars synthesizer sheen and echoing vocals. there are also subtle cadence changes bringing in celtic gig and reel. its an upbeat sound which hides the dark lyrics of a bad bad haunting breakup. the last song is again from the new album . EYES TO THE WIND is a beautifully layered song with dylan-like vocals but the special the war on drugs guitar and synthesizer finish with harmonica thrown in. the lyrics are tragic breakup stuff. a soul laid bare for all to see. 40 minutes and its over too soon  but on the showing of those last 2 songs the war on drugs are going to win many more battles this year.