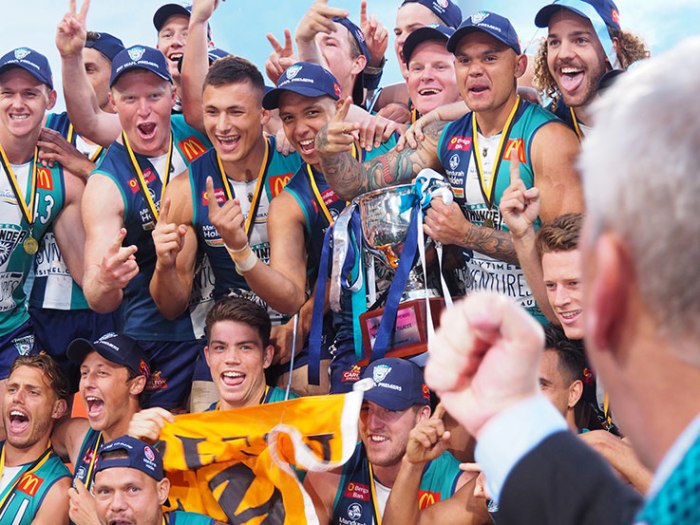 The Thunder have done it again. Photos by Les Everett.

AND so Peel have won the WAFL premiership for the second year in a row. Has the AFL alignment created an unstoppable juggernaut? On the evidence of the 2017 grand final, apparently the last to be played at Subiaco Oval, the answer is no.

Subiaco, the WAFL most powerful club and the one Peel coach Cam Shepherd says his club would like to emulate, could have, maybe even should have won this game. Thunder began best and Zac Dawson kicked the first goal and set up the second in an inspired start that had me rethinking my pregame strategy and contemplating explaining a Dawson Simpson. Dawson caused no more damage to the game or my reputation as he was forced off early with an ankle injury.

However Subiaco stuck at it. The gun Lion midfielders Kyal Horsley, whose kicking at times was extraordinary, Leigh Kitchen, who was everywhere, and Chris Phelan, who made a remarkable return to senior football, were highly effective and ensured their team stayed in the contest. The game could have been decided in the third quarter and perhaps it was… Subiaco dominated and scored 2.6. Peel hung on and kicked two straight goals. At the last break the Lions should have had a handy break but instead they’d given Peel a sniff and they didn’t get away with it.

In a tight last quarter Subiaco stuffed up their opportunities while Peel snared theirs. 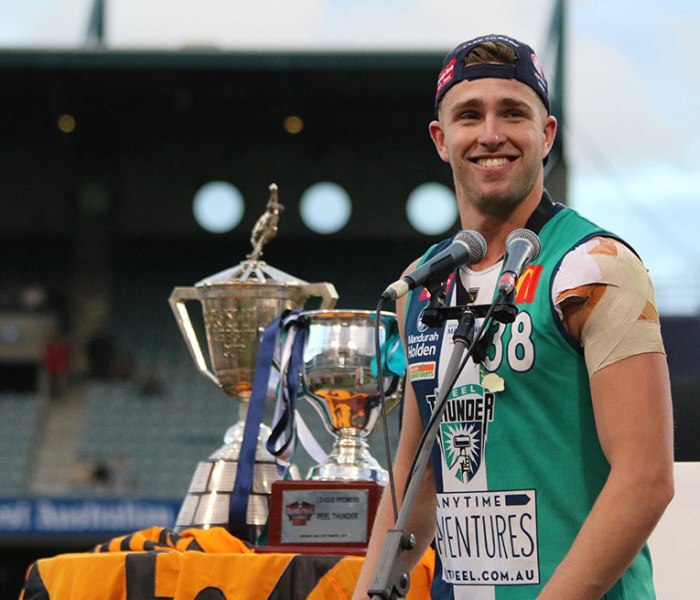 Defender Luke Ryan (above) was awarded the Simpson Medal as the best player on the ground. The AFL Rising Star nominee again showed his excellent judgment in the air and brilliant kicking skills. Thunder made a big call at selection by leaving experienced ruckman Jon Griffin out of the team and bringing in Brennan Cox for his first final. The move worked. Sean Darcy dominated the ruck wining 73 hit outs while Cox was a more than useful back up. Matt Taberner was a constant threat for Peel and kicked two goals, Ryan Nyhuis again outpointed the dangerous Liam Ryan, Traye Bennell impressed with his smooth skills, Nick Suban didn’t get a lot of the ball but his 15 tackles tell something of the leadership role he’s taken on in this team while Danyle Pearce was busy and gained some important clearances.

As we’ve mentioned before there will be changes to the finals eligibility conditions under the WAFL’s AFL alignment system… but the Lions don’t need to worry about unfair rules when looking for reasons for this defeat… it’s there in the 2.6 third quarter and it was plain to the 18,180 who turned up on a horrible September Sunday and Subiaco Oval.

A farewell to Subiaco Oval.