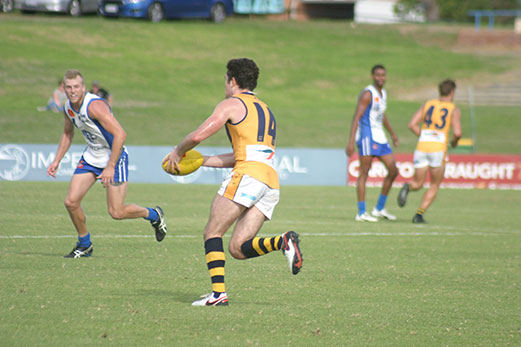 After a couple of fade outs and some wasteful kicking for goals Claremont had some “some areas to address”. At East Fremantle Oval on Saturday they had a fast start,

nothing new there, but at half time they were 10 goals straight to the Sharks 5.5. The home team was gallant but the Tigers always seemed in control and they not only finished well but finished with an incredible 19.2. Darcy Cameron (left) looks like a star of the future, he kicked two goals, took some great marks and looks the kind of athletic big man teams at a higher level crave. Werribee recruit Jye Bolton, captain Jake Murphy and rookie Jared Hardisty provided some pint-sized grunt and Jack Richardson kicked four goals.

East Fremantle were pretty good at times. George Hampson kicked four goals, Cameron Eardley was good in the midfield and Ryan Lester-Smith is enjoying life in the back line.

South Fremantle flexed their muscles at Lathlain Park and crushed Perth who have kicked 8.33 in the past two weeks. Mason Shaw kicked five goals for the Bulldogs, Brendan Verrier and Steven Verrier ran riot and Josh Pullman controlled matters in defence. Julian Jacobs had a good game for the Demons who sadly seem destined for another long lonely season.

Andrew Strijk and Aaron Black were good for the Falcons.

In the Sunday morning game at Bassendean Swan Districts gave a bit of cheek and led Subiaco at half time. The Lions then kicked the first six goals of the third quarter to take control. Big men Clancy Wheeler (two goals) and Lachlan Delahunty were effective for the winners, Adam Cockie and Kyal Horsely were strong in the midfield and Wayde Twomey and Declan Jackson were part of a solid defence. It was pleasing to see the Lions fit both Bill Fetherstonaugh and Matt Bogensperger in the same team and they both performed with distinction.